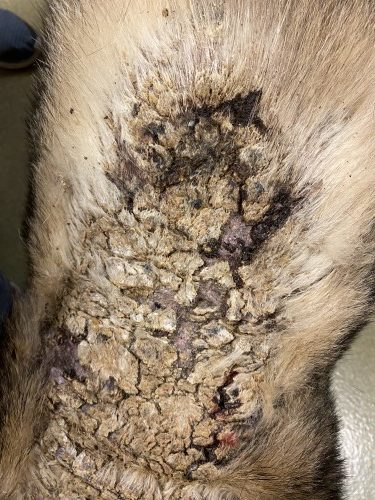 Calcinosis Cutis in a Husky mix

Written by Curtis Plowgian on 7 March 2022. Posted in Uncategorized

This is Prince. Prince had a disease called calcinosis cutis, in which is body is making deposits of calcium that work their way out of the deep skin out through the surface of the epidermis, causing hair loss, secondary infections, and sometimes itching.

This disease is most commonly caused by a condition called Cushings syndrome, a disease of mostly older dogs where the body overproduces cortisol, its stress hormone. Sometimes calcinosis can be caused by overuse of steroids such as prednisone or depomedrol. Many cases of calcinosis cutis are much milder than this; they can range from small, red, gritty patches of thickened skin to full-on “armor plating” like we see in Prince here.

Prince is now being treated for his Cushings syndrome, and he is regrowing all his hair (this is after a year of treatment; calcinosis can take many months to resolve):