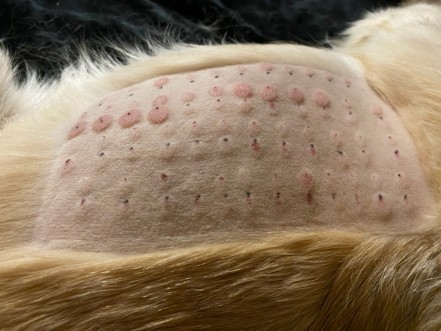 Written by Curtis Plowgian on 7 March 2022. Posted in From The Editor

Does your pet have allergies? Are you treating with daily or monthly medications that help to control the itch, but only seem to help for the day (or month) that your pet takes them? Has your veterinarian or veterinary dermatologist recommended allergy testing and immunotherapy? Immunotherapy is a great option for many environmentally allergic pets, and is considered by many to be the gold-standard for long-term safety in allergy treatment. However, you (and possibly your veterinarian) may have some hesitations about immunotherapy, or questions about how well it works.

I see clients at my practice at least once a week with preconceived notions about what immunotherapy is, and what it is supposed to do for their pet. Sometimes these notions are entirely accurate, and sometimes we have some work to do before we get on the same page. I have laid out five of the most common misconceptions that I regularly encounter during my consultations and exams, so that hopefully if you have to take your pet for allergy testing and immunotherapy, you will be better prepared to talk to your veterinary dermatologist about it.

Allergies are a lifelong condition. For pets with environmental allergies, immunotherapy is one of the only therapeutic options we have that isn’t a drug, and that gives us the possibility of coming off what would otherwise be lifelong medications. HOWEVER, just because immunotherapy helps us get off drugs doesn’t mean that drugs aren’t helpful (or even necessary). Allergen-specific immunotherapy often takes 6-12 months to start taking effect. We don’t want our pets to be miserable in that time, so normally in the first year of immunotherapy, we rely heavily on medications for itch relief in the short to medium term. As a dermatologist treating allergies as a lifelong condition, I always want to try to get to the lowest possible maintenance dose of drugs that we can, and often with immunotherapy, avoidance of avoidable triggers such as fleas and food, and supportive therapies such as bathing and ear cleaning, we can markedly reduce the dose of drugs that many dogs and cats have to stay on long-term, but even with the help of all of these therapies, some dogs may need medications for the rest of their life, especially during their bad seasons.

It’s true that immunotherapy is quite expensive, and the costs of immunotherapy are certainly more front-loaded than they are with medications. Testing is expensive (often ranging from $400 to over $700 or more depending on where in the country you live and which test is performed), and the immunotherapy vials themselves aren’t cheap (usually over $300, although each vial may last you several months). This may seem like a lot to spend on a therapy that may not work for over a year, during which time we still need medications and other therapies. However, for a dog who is doing well, you may only need one vial per year, and if your pet is doing well enough on immunotherapy to come off medications, the savings in medication costs alone can more than pay for the immunotherapy (especially in large or giant breed dogs). I usually tell owners that immunotherapy is an investment in their pet’s future, and usually within a year, time will tell us how well that investment is going to pay off.

As mentioned above, immunotherapy doesn’t work immediately. We usually still have to be on medications for months to years, and in some cases, we never come off them. There are even a proportion of dogs and cats who get no response at all to immunotherapy (as high as 30% according to the literature). Most pets who are on immunotherapy, even if they are able to come off drugs, still have to stay on the immunotherapy for the rest of their lives. There are a very small percentage of dogs and cats who do SO well on immunotherapy that they are eventually able to come off all therapies (including their immunotherapy), but these pets are the exception, not the rule.  So, if you and your pet are starting a course of immunotherapy with your veterinary dermatologist, remember that patience is a virtue (this is the case with skin diseases in general, but is especially true with desensitizing the immune system with immunotherapy). In the immortal words of Amy Grant, “It takes a little time sometimes to turn the Titanic around. It takes more than you’ve got right now, so give it, give it time.”

This is not only true of immunotherapy, but also of the allergy testing that we use to formulate our immunotherapy shots and drops. Food allergies are considered “avoidable” allergens, meaning that rather than desensitizing the body and immune system to them, it is best to just avoid eating whatever food triggers your dog or cat to start itching. This means that when your dermatologist tests your dog for allergies, they are only testing for environmental factors, not foods (even at my clinic, when we test dogs and cats for “corn”, we are testing for the pollen, not corn as a food). There are many lab tests out there that exist for food allergies (including blood, hair, saliva tests, as well as intradermal and patch tests), but none of these tests have proven to be reliably accurate. Many of these tests have numerous false negatives (meaning they miss things your pet is actually allergic to) as well as false positives (meaning that when your test says your dog is allergic to cranberries, but your dog has never eaten cranberries before, the test is probably mistaken). Until new research comes along to give us tests that are more accurate, the only way to test (and treat) for food allergies is a hypoallergenic elimination diet trial under the guidance of your veterinarian (or veterinary dermatologist).

It’s ok if you can’t do needles – really! Not all of us were made to give (or receive) shots on a daily or weekly basis. While some medications (such as insulin or certain antibiotics) only come in an injectable form, immunotherapy is constantly evolving, and new routes of administration have emerged in the last several years. The oldest and most well-established alternative to needle pokes is sublingual immunotherapy (SLIT drops), were a drop or two of serum is administered under the tongue and absorbed across the mucus membranes of the mouth. More recently, in the US and Europe, an increasing number of dermatologists are giving intralymphatic immunotherapy (meaning injections into the lymph node performed by your veterinary dermatologist that last much longer than simple injections under the skin). There are even dermatologists beginning to test the safety and efficacy of immunotherapy in the form of a transdermal cream, which shows promise as a new needle free option. So if you want to start desensitizing your pet to its allergies but can’t handle poking him or her with a needle, talk to your veterinary dermatologist about the latest options available.